Productivity Today - Managing Attention in the Digital Age - Learn with Todoist $35.00
Back to products
Next product

Kadochnikov Systema – The Fight Formula : Understanding Secrets Of Self-Defense (RUS) is a digital online course/Ebook with the following format files such as: .mp4 (.avi or .ts), .mp3, .pdf and .doc .csv… etc. You can access this course wherever and whenever you want as long as you have fast internet connection OR you can save one copy on your personal computer/laptop as well.

It’s no use denying that the modern 21st century world becomes more and more unfriendly. The spirit of it is the spirit of competition and rivalry, and an encouraging atmosphere for aggressiveness.

At the end of the 20th century, A.A. Kadochnikov was the first to make the theory of survival a science. His system gives everyone a chance to get the knowledge, skills and tricks that remained secret for ages.

If you’re looking for a simple and reliable system of personal development for raising the safety of your life, your health level and mental stability suitable for anyone of any age, this presentation may be of interest and use to you. Soon enough you’ll get to know why.

There are vulnerable spots on every part of human body and one should be able to get to them as fast as possible.

Soon enough we’ll talk about this and also about the secrets of  -the invisible weapon, the key part of the Kadochnikov system, that distinguishes it from any other hand-to-hand systems and make it easy to grasp.

But before we proceed to it, we should turn your attention to the problem that makes a modern person  weak, preventing them from behaving properly in any situation of conflict.

The thing is that the culture we nowadays are part of proclaims certain values.  We are called to be decent with people around us, to be loyal and tolerant.

Starting with childhood we are instilled that belligerent people have to pay for their aggressiveness by being unpopular and isolated.

Public conscience is installed with the concept of correctness, politeness and cooperation.

In other words, the problem is essentially that we are prepared to live in  peace, which makes us totally unprepared for the  real life  full of conflict and aggression of those around us.

It makes no sense to deny that the modern world of the 21st century becomes more and more unfriendly.  The spirit of it is the spirit of competition and rivalry, and encouraging atmosphere for aggressiveness.

All is nice and peaceful only on the outside.  But on the inside it is the dog-eat-dog world.

Society may deny it, may continue painting in rose colors, but many of us are already aware of the truth due to the aching scars left after facing it. 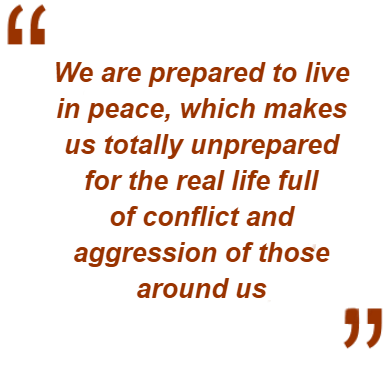 Of course this doesn’t mean that we can’t live in compliance with the ideals of peace, friendship and unselfishness. A lot of people dream of it.

However each of us has had fits of anger or aggression, which are hard to fight.
In the past people could hope to be cared for by some structure – the state, a social organization, family or friends.

But it is no longer so.

The modern world is cruel and selfish. Everyone can rely only on oneself and has to care for oneself as well

That is why nowadays it is not the ideals of non-aggressiveness turning us into a submissive victim we need,..

but the practical skills and knowledge that will help us to behave correctly in a situation of conflict to come out victorious.

We are not talking, of course, about learning to wrench out things from somebody’s hands or, vice versa, being forever defensive.

It is about being able to reason, think ahead, think strategically and correctly channel one’s own aggression whenever there is a conflict instead of suppressing or negating it.

If there’s an ideal to aspire to, it is an ideal of a strategist-warrior, able to be in control in complex situations and conflicts thanks to skillful and reasonable actions on any level – physical, spiritual, intellectual.

Such a person in our system is called  a safety person, whose invisible weapon is personal safety technique.

Let us explain you in short why we prefer to use the term -personal safety technique speaking of what we do and what we teach others, instead of the common names, such as hand-to-hand combat, self-defense, survival techniques etc.

The thing is all of the above mentioned collocations describe different aspects of particular situations, when one may need any skills and knowledge of how to use them.

Only when the objective is strictly defined, are we able to speak of some particular methods that depend on the aims and tasks at hand.

For instance, a hand-to-hand fighting program for soldiers will be different from the one for police officers. It is connected to the difference in the tasks and the rules they are guided by, despite the fact that in both cases it is about professionally applied training.

And yet the practical skills and knowledge of correct behavior in a situation of conflict is needed by any man to ensure their safety, honour and dignity.

Such universal skills, effective in any situation of everyday life, at the time of consciously mastering them are hard to put in the Procrustean bed of a particular method whatever it is called.

… could be applied to the Kadochnikov system, as all of them are suitable, but none of them is enough to fully show the essence of it.

This is why abandoning the stereotypical instinctive (i.e. non-effective) behavior in a life-threatening situation in favor of effective models of behavior and motor skills are absolutely necessary.

And here we are, standing right beside the concept of counter-instinctive or scientific approach.

Why do we call it scientific?

Because mastering the fighting algorithms start with one of the fundamental scientific principles – -ex adverso or to the contrary.

It means that the process of learning is started by assuming that the worst has already happened.

Then we’ll calmly analyze the actions to be taken to avoid -the worst. 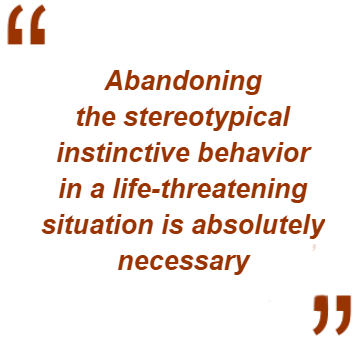 Because if the Opponent Is Armed, He Is the Predator and the Attacker. While You’re the Victim, the Prey 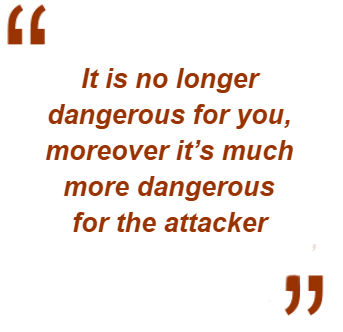 You defend, try to keep the distance, put the arm under the hit or just avoid it. With such a model of behavior the result is quite predictable – only the time is in question.

But if you change the model and start behaving as a predator instead of the prey, you can turn the tables.

He should have let go of the bat at the moment you took over the initiative.

He is acting by instinct, continuing with the scenario of his aggressive behavior, yet all his aggression and physical efforts are turned against him and multiplied by the lever. He stands no chance.

To counter your model of behavior he has to be able to act counter-instinctively. But one has to learn that.

When we talk about learning we don’t mean training, but at least a short introductory course of effective behavior in a life-threatening situation.

Another example,  if you are seized by the arm, what’s your first reaction?

Presumably, to pull away, right?

But is it effective from the point of view of the system we use here? What is expected of you by the opponent? What is he ready for?

Indeed, that you’d try to pull away, as a model victim.

What would catch him unawares?

He’d be surprised, if you won’t even think of pulling away, but will softly shift the center of mass in such a way, that the load at the place of the seizure will be reduced, and find the pivot.

The opponent will find relaxation at the place where he expects tension.

The only thing you’ll have to do then – to form the correct lever and apply the force in the right direction – the opponent will be dumbfounded. Moreover, he won’t even understand that he is not the predator anymore, but the prey.  That’s how it works.

for situations of conflict, than perfect a dozen of holds you’ll never be able to use because of the instinctive reactions of your body.

It is a natural reaction of your system when leaving the comfort zone.

There is nothing surprising in the fact that if we shift from the comfort zone where everything is known and predictable, to a new situation which is by the way also dangerous…

…for our wellbeing, health and life, without being trained and prepared for it we start panicking.

The implications are of an obvious nature.

Any situation we have no idea how to behave in is stressful. This is perfectly normal. But-¦

If We Don’t Want to Be the Victim of Circumstances, All the More by Chance, We Have to Get Prepared for Such Situations

That is why we need the fighting algorithms of personal safety technique.

Such algorithms are the basic set of motor skills natural for the body, which will allow you to react correctly to any situation at a counter-instinctive (i.e. efficient) level.

In other words, from a thousand possible moves that are generally performable for our body (thanks to 244 degrees of freedom of osteoarticular system of a human body)…

one should choose a number of the most useful, universal, applicable to any environment (cold or warm, sandy or icy, restricted, standing or prone etc.), do not require any physical qualification (one can be ill or injured) and are easy enough to master.

Being able to use such algorithms you shorten the time necessary to get the skills for the right behavior and effective motor activity by a dozen or even a hundred.